Of all the RC crafts available, radio controlled helicopter is arguably the hardest to master. However, with the advent and advances of today’s RC flight simulators, the learning curve have decreased. Now, new RC helicopter pilots can literally crash as often as they want until they can eventually keep their helicopter in the air. Nevertheless, conventional RC helicopter training lessons has not lost their importance. For some, they provide a guide to practicing in the simulator. For others who don’t like simulators - or for some reasons can’t get their hands on one, flying lessons are invaluable. For those that choose to go the no-simulator route, it is generally recommended that you hire a certified instructor. But, with the increasing popularity of cheaper electric RC helicopters, the cost involved with this hobby decreased exponentially. As a result, many new pilots are choosing to learn to fly with neither a simulator nor an instructor. No matter how you choose to learn to pilot RC helicopters, this article which provides classic helicopter lessons will definitely come in handy.

First things first, have your helicopter properly trimmed and set up before doing anything. Most electric models are already set up right out of the box. If your model requires any setting, make sure you follow the instruction in the manual or hire/ask someone knowledgeable to do it for you. Trimming won’t be covered in this article because it is a whole topic in itself.

Once your helicopter is trimmed, you’ll need a simple pair of training gear for bigger models. You can actually make one yourself using two four-inch rods and four balls (ping-pong balls will do nicely). However, it may be easier to buy one. If you are learning with a co-axle ready-to-fly electric helicopter such as the Lama or Walkera 54, then the training gear is unnecessary. On the other hand, if you are learning with a bigger and more conventional model such as the T-REX, then having a training gear is absolutely mandatory.

Now, you’re going to pilot your helicopter for the first time. However, for this first lesson, the goal is to learn what it “feels” like to control one. Therefore, what you want to do is to bring up the throttle/collective to the point where the helicopter is just about to lift off the ground but not quite taking to the air yet. With the helicopter in this half on the ground, half wanting to lift off phase, move the cyclic control around and see as well as get a feel of how the helicopter will react to each control. Do this several time until you have adequately felt all of the controls and more importantly, understand them. 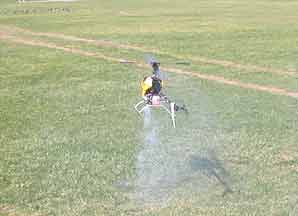 Once you’ve mastered the ground exercise, the next step is to hover. Every helicopter pilot and instructor will tell you that one of the most (if not the most) important component of a helicopter flight is hovering. In fact, no matter how fancy the flight, at its most fundamental level, a helicopter flight starts and ends with a hover.

Try hovering many times. Between each hover, reflect on what you did right and what you did wrong. You will find that each hover will be more precise and more controlled than the last.

Another important point during this lesson is to always point the tail of the helicopter towards you. Don’t try to point the helicopter in any other direction at this point as you will very likely get disoriented. Orientation training will come later.

Once you’re comfortable with hovering at 1 foot, try bringing the helicopter up to an altitude of 3 to 5 feet. It will seem scarier but in fact, hovering at 3 – 5 feet is easier than hovering at 1 foot. Keep doing this exercise until you can hover for an entire flight of the battery pack or the fuel tank, which equals to around 7 to 10 minutes if you’re practicing on a simulator.

Each pilot takes different amount of time to learn this crucial skill. Some get it extremely fast (within days) while others take weeks or even months. Don’t be discouraged, take your time and learn at your own pace. As long as you have fun while practicing, who cares how long it takes. Don’t rush through this lesson. It is very important that you learn to hover and can do it comfortably. 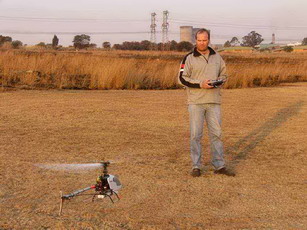 After having mastered hovering and basic flight while flying tail-in, the next step, the nose-in hover, will be relatively more challenging. The idea behind this exercise is quite simple; simply hover like you did lesson 2, but this time, hover with the nose of the helicopter pointed towards you. While this may sound simple, many new pilots find this extremely difficult due to the fact that most of all the controls are now reversed. At this point, you may already confident about flying and feel that you can easily perform this hovering exercise at a high altitude. Please refrain from doing that. Instead, start this exercise by hovering at 1 foot, then slowly increasing the altitude to 5 feet as you are more confident and comfortable with the now-reversed controls. Keep doing this exercise until you can master hovering with the nose pointed towards you. Having accomplished this lesson will greatly improve your orientation awareness.

This final lesson will combine the skills you’ve learnt from previous lessons, namely, hovering, orientation, and direction flight. The combination of these skills will produce a full flight. The first goal is to try to navigate your helicopter in a square pattern. If you’ve been following the exercise without cheating, you’ll find that the square flight can be accomplished quite easily. The next goal would be to fly in a figure 8 pattern. This will prove to be more challenging but it is definitely not out of reach. As you do more and more figure eights, concentrate on keeping the 8 a perfect shape. Try your best not to veer off course. Becoming more experienced, you should aim for more and more flight control accuracy. Once you’ve mastered the figure 8, you should be able to pilot your helicopter anywhere you desire. Practice makes perfect, but also remember to have fun; after all, that is the whole point of a hobby.